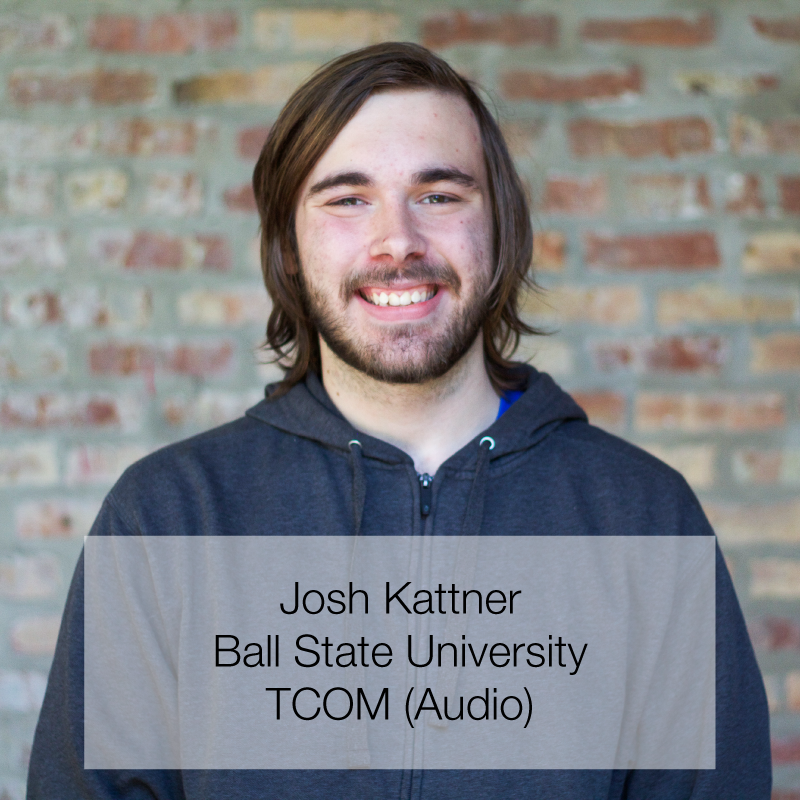 Joshua Kattner is six feet five inches of level-headed intellectualism, musical genius, and kind-hearted gentlemanliness. Going into his third and final year at Ball State University pursuing a degree in telecommunications, Joshua has a passion for film composing, a gift of his which is all the more impressive considering he is completely self-taught. After 3 years of classical and jazz trumpet-playing, Joshua received his first piano at the age of 13, and was immediately hooked.

Without anybody pushing him to, Joshua played scales for hours that first time he ever played piano, and continued to practice six to eight hours a day for three years straight, which helped him to win 4th in state for classical composition out of 660 people. Joshua’s teenage mind blossomed with dreams of being a piano performer or session musician. Unfortunately, these dreams would come to a sudden, ironic halt.

One day during his sophomore year of highschool, Joshua woke up after practicing for a competition, only to realise that his arm couldn’t move past a certain point. Because of Joshua’s nearly obsessive dedication and passion for practicing the piano, his tendons became severely strained, and continue to be damaged to this day. However, it was because of this injury that Joshua made the transition into composing.

Joshua’s brother sold his own laptop so that he could buy him composition gear, and since the age of 18, Joshua has not had a month that he hasn’t had a job. While film composing is his passion, Joshua also has a heart for mission, and is open to whatever God has planned for his life.

“I’ve wanted to go to seminary since I was 9… it’s something I’m looking to go to maybe two or three years after graduation. After that, I don’t know how God will mesh these two passions.”

For Joshua, Crossroads was a way to use and pursue his passions for both film and the Bible, and he saw it as an opportunity to see how God would continue working in his life. While it was definitely outside of his comfort zone, Joshua felt God’s clear call that this is what He wanted him to be a part of this summer.

Originally, Joshua was most excited to compose for IndyCC projects, as it was a conference which not only changed his life, but it was where his fiance came to place her faith in Jesus Christ. Within Crossroads, Joshua’s dedication to meeting deadlines and organizational skills have been utilized well as one of the project managers for all IndyCC films, and he is also in charge of all audio and compositional work for all films in general. Through working with such a talented team of fellow content-creators, Joshua has learned how to do motion typography, graphic work, animation, After Effects, and has even learned about coding, though he considers learning how to brainstorm one of the most valuable things he’s been able to be a part of.

While Joshua has always struggled with workaholism, the busy schedule of being on Summer Mission with Crossroads surprised him, though it’s this schedule which has helped him forge what he considered to be long-term friendships.

“You have to become brothers and sisters to survive; you can’t stay in your room all day every day… that’s not the reason you’re here.”

Joshua has been enjoying the Crossroads team, and loves being surrounded by Christians who hold him up in his faith. Being here, he has been able to get away from his comfortable reality back home, and devote much of his time to studying the scriptures in depth. Already, he’s seen an immense amount of growth within himself, something that his fiance was able to notice when she came to visit a week ago.

Though living and doing ministry in Chicago has been a wonderful and growing experience for Joshua, he finds himself dreaming of cornfields.

“There’s something about the beauty of nature that just captivates me. I miss my garden at home, being able to walk in fields, be in my backyard and lay down and look at the sun… but part of what God’s been teaching me is that even in uncomfortable situations, He’ll provide.”

While being a part of Crossroads has been challenging, Joshua loves the ways it has helped him to get outside of his own head and into other people’s lives, learning and growing from one another, and he is looking forward to being able to go home and use what he’s learned here to impact his campus, church, and community.

To people considering being a part of Crossroads, Joshua has this to say:

“Go for it. Go on a project, be it with Cru or some other organization. Run. Trust in God. It will be challenging, and it will be hard, but you will absolutely love what God will teach you along the way.”