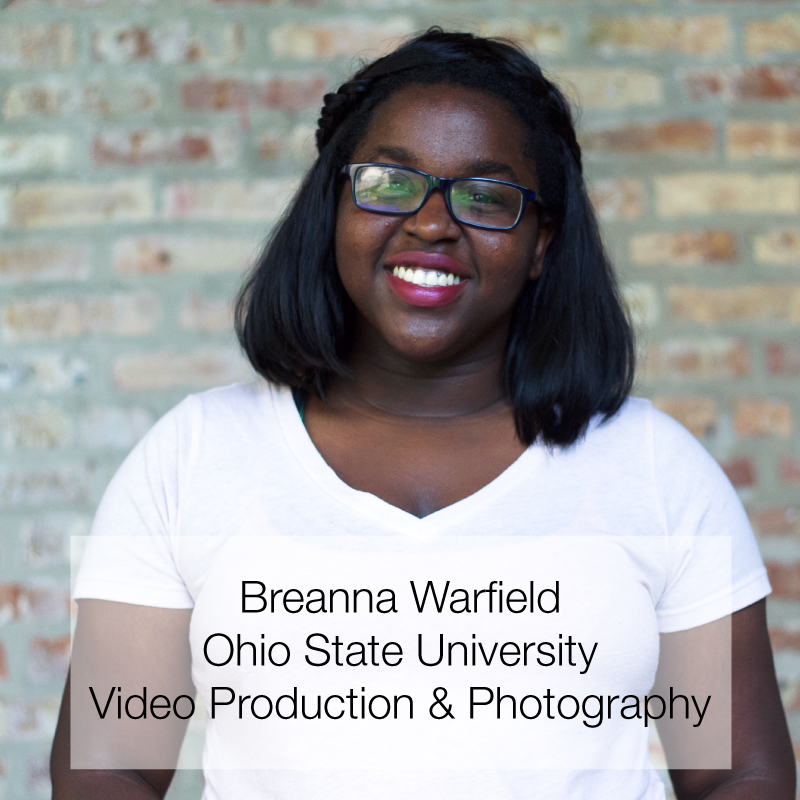 Breanna Warfield is a person of many passions.  A sophomore from Dayton, Ohio, and a student at Ohio State University, there are many different fields that interest her.  Bree is majoring in photography and film studies and minoring in video art, media production analysis and German.

Bree would like to have a career in the post-production of films.  She would also enjoy doing some photography work on the side.

“When I went to a career tech high school, I had to write an essay to get in and I wrote about nursing. But then as a freshman, I randomly went into radio and TV department and I just fell in love with the editing and filming process. It happened really quickly.”

Bree enjoys having lots of different tastes.  This takes shape in her music taste, ranging from alternative to heavy metal, and the way in which she looks at the world, especially at the filming world.   She “tends to notice things others don’t and thinks of things that people don’t normally think about.”

Bree was intrigued when she learned about Crossroads.  She had joined the video team for the Ohio State Cru movement and was quickly encouraged by Josh Coy to join him and a team of other students in Chicago. “He really hounded me about it.”

She saw joining Crossroads as a way to deepen her relationship with God and also use her creativity for her Creator.  Bree sees her observation skills as being extremely beneficial to the Crossroads team.  She also considers the fact that she is slightly younger than most of us to be a big help because she can stay relevant to incoming freshmen, which is a huge focus for the Cru ministry.  Being a part of Crossroads has grown Bree in more than just the fact that she is improving her post-production skills.

“Being at Crossroads taught me how to work in a team. It got me used to being in the fields of video and branding.  From brainstorming to the final product, I’m seeing the process. It’s a big transition, but it’s a look into what they do in the real industry.”

Bree sees the role of film as crucial in fulfilling the Great Commission. She recognizes that people all have different ways of learning but feels like it’s a common thing that people don’t always have the longest attention spans.  However, she feels that telling stories through film can help alleviate this potential problem. “If you see a story you can relate to, it’s really impactful.”

Bree is satisfied with the work that the Crossroads team has produced so far.  She thinks the work and care with which we’ve approached all of our different projects has shown.  Bree has worked on the intro videos for our weekly meetings, a viral video of one of our other interns and plans to work on a video that promotes Strategic Alliance, a Cru ministry.  Overall, this experience has been very fulfilling for Bree.

“I love everything, just the people, the fun projects, the connections I’ve been making between people and my relationship with God. I can not only talk to friends about video projects but deeper things too.”

Bree has loved living in Chicago and experiencing city life with her friends.  Since being here, she’s started learning ukulele and guitar with the help of one of her fellow Crossroads interns.  She would be more than happy to recommend other students to join.

“We need more creative minds here. Everyone has a different opinion, and we need those opinions to outreach to students and bring them to God!”